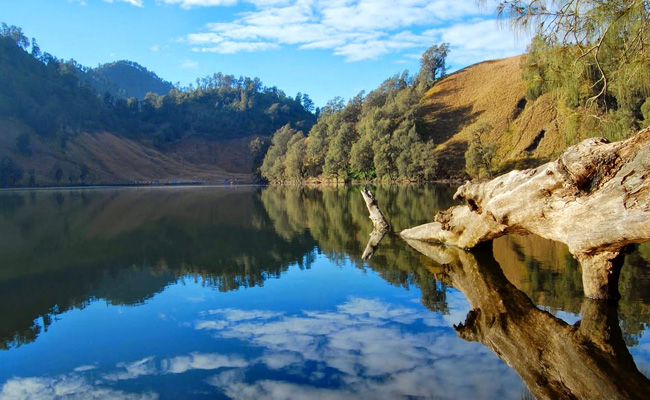 Ranu Regulo is one of the most famous lakes located near to Bromo Tengger Semeru National Park. The location is at the foot of Semeru Mountain featuring lush nature and comfortable atmosphere. To be exact, the lake belongs to Ranu Village, Lumajang District. That means Ranu Regulo and Ranu Pane Lake are located near to each other so tourists can visit both of them on the same day. Not to mention common tourists may meet trekkers who visit the lake for resting during their trekking to Semeru Mountain. The nuance is perfect for relaxing after all.

The Nuance
It is without a doubt Ranu Regulo Indonesia is beautiful and peaceful. The water looks soothing and it is surrounded by trees as well as bushes. A unique part of the lake is that it features a small dock which often becomes a place for sightseeing and relaxing. The best thing is that the local government had included pavement near to the lake, so it looks so comfortable. When it is about the location, it only takes 500 meters to reach Ranu Pane so tourists can go to another lake by foot.

Exploring Ranu Regulo Lake
Despite the concealed location, Ranu Regulo is considered easy to reach. The question is what people can do on the site. First, the lake is perfect for relaxation. Thanks to the serene nuance which keeps visitors away from stresses and burdens. What they can hear is only the song of the birds and insects. Even not many visitors are seen during working days, so the lake feels like a private holiday site. It is suitable for those who want to get away from busy routines and get refreshed right away.

The next common activity to do is camping. Even though it is not as popular as that of Ranu Kumbolo, Ranu Regulo is also suitable for camping and enjoying the nature. What about fishing? Well, it is also possible but the fishes are scarce there. As an alternative, tourists can simply sit on the small deck and enjoy the fresh air while witnessing mountainous scenery ahead. In this case, carrying a camera is quite recommended so tourists can take pictures of those beautiful views.

For those who want to spend the night in Ranu Regulo Indonesia, they can choose either camping or rent a room in a nearby homestay. Have no worries. The rent fee is considered affordable and the location is quite strategic, which resides on the edge of the lake. As for the tip, visitors must wear comfortable clothes especially a jacket, head protector, scarf, etc. The reason is that the weather is cold especially in the morning and at night.

How to Get There
The best route to use when visiting Ranu Regulo is Semeru Street. The distance is 28.6 km from Lumajang City so the trip may take about 1 hour. Apart from Lumajang, tourists can come from Malang City and head to Tumpang. Have no worries. The road has a good condition so it is going to be a comfortable trip.