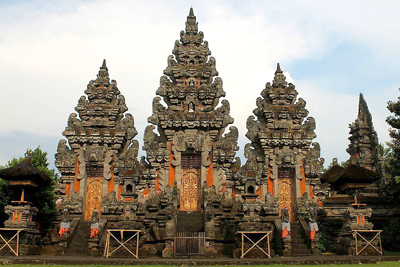 What do tourists recognize about Bromo Semeru Tengger National Park of Indonesia? Commonly, they may think about majestic mountains and stunning lakes scattered in that area. The thing is they must know about other attractions as well, especially Mandara Giri Semeru Grand Temple Indonesia. That structure becomes the proof that there was Hindu society in that site back then. As the name suggests, the temple is located at the foot of Semeru Mountain. To be exact, it resides in Serma Dohir Street and belongs to Senduro Sub-District.

The Nuance
Mandara Giri Semeru Grand Temple Indonesia has a serene nuance. It is because the location is a little bit far from the main road. No wonder, not many people are seen on the site. In terms of size, the temple is considered big and three structures reside there. Some tourists might wonder why the locals built the temple in such location. According to a reliable source, the temple symbolizes the movement of the Peak of Mahameru Mountain from India to Indonesia, especially Java Island. Due to such reason, the locals named it based on Semeru Mountain (which is the highest mountain in Java Island).

Exploring Mandara Giri Semeru Grand Temple
The most interesting part of the temple is definitely its design, which represents those of Balinese temples. When it comes to architecture, the temple applies some characteristics of Majapahit Kingdom. Here is the good thing. Tourists are allowed to enter the temple and explore the structure. Once they get in the temple, they might find a hall and some ornaments (statues). Most of the ornaments have the shape of elephants, actually. Sometimes, villagers come to the temple to conduct a religious event. This also becomes the charm of the temple, which attracts those historians and culture lovers!

For tourists, the best time to visit Mandara Giri Semeru Grand Temple Indonesia is during local religious events. Some of the examples are Mapulang Dasar Sarwa Sekar and Pamlaspas Alit. Usually, the locals perform it on Sunday so tourists must also come during the time. What’s next? Apart from the events, tourists can take advantage of the temple to take selfies or conduct photography. The architecture of the temple is quite astonishing after all. The best spot to take a picture is either in front of or inside it. Here is the thing. Littering and careless acts are quite prohibited there.

Despite the desolated nuance, the temple would be crowded during weekends or religious events. Therefore, tourists should come to the site at those times. One thing they need to pay attention is that they must not disturb worshipers or cause any noises during the ceremony/meditation. It is possible to join the meditation, in fact. What they need is only permission from the villagers. Surrounded by big trees and fresh air, the temple indeed becomes a great destination for the next vacation!

How to Get There
The simplest way to reach the temple is through Semeru Street. It takes only 1 hour from Lumajang City as the distance is 28.6 km. Precisely in Jalan Serma Dohir, Senduro Sub-district, Lumajang Regency, East Java, Indonesia.