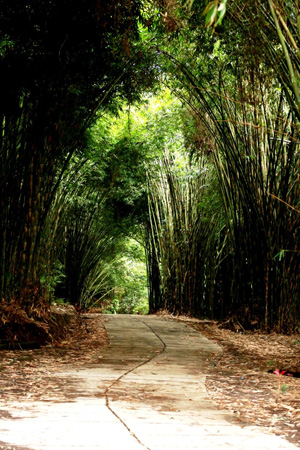 In East Java Province, tourists can find a famous active volcano called Semeru Mountain, Indonesia. Apart from that, some tourist attractions also reside near to the mountain including the bamboo forest! It belongs to Lumajang City and has been chosen as a recommended place to relax and photography. To be exact, the location is in Sumbermujur Village, Candipuro Sub-District. As the name suggests, that site features lots of bamboo trees and some gazebos. Spending time in such natural attraction would be quite helpful for those who want to eradicate stresses and get a peaceful feeling.

The Nuance
The overall size of the bamboo forest Indonesia is about 14 hectares and it features mainly bamboos and bushes. No wonder, the nuance is quite shady and cool there. Apart from plants and bamboo trees, the site features some gazebos on which tourists can relax. It is true visitors can rest and take shelter on those gazebos. However, the bamboo trees have provided the shade they need! That means no one would get uncomfortable when spending time on that site. As if, the bamboo forest provides an unlimited coolness all day.

Exploring Bamboo Forest
The prime reason for visiting Semeru Bamboo Forest is definitely its lush nature. In fact, it is the main natural tourism in Sumbermujur and Candipuro. Most of the visitors come to the bamboo forest to enjoy its peaceful nuance. It feels like in a private tourist spot due to its serene atmosphere and vast size, as well. All the way to the location, people can also witness beautiful local farms and pine forest. Not to mention longan trees are also seen all the way to the site. Such beautiful trip becomes the first thing they get when visiting the bamboo forest Indonesia. More good things are waiting for them later.

Once tourists arrive at the site, they might see several local people getting around the forest. The friendly smile of those people is indeed satisfying. It becomes the sign that villagers are open to tourists and even foreigners! At the west part of the forest, tourists might see the majestic Semeru, Wayang, and Sawur Mountain. Sometimes, though, fog appears on the horizon blocking the views. In order to get the perfect views, therefore, tourists should come either at noon or afternoon where there is no fog. That’s common sense.

Due to its solemn atmosphere, visitors can even hear the sounds of wild animals like monkeys and bats. Sometimes, the monkeys come down the trees and approach tourists. Have no worries. They are not dangerous. If necessary, visitors should carry peanuts or snacks so they can feed the monkeys and befriend them. It is even possible to take pictures together with those monkeys. Another great thing about the bamboo forest is the facilities including toilets, food vendors, and resting places!

How to Get There
The first checkpoint is Lumajang City of Indonesia. Next, tourists can take a local transportation and head to Candipuro Sub-District. The last destination would be Sumbermujur Village where the bamboo forest resides. The distance between Lumajang and Sumbermujur is 19.3 km and it takes about 40 minutes. When it is about the route, tourists can use Nasional III Street.