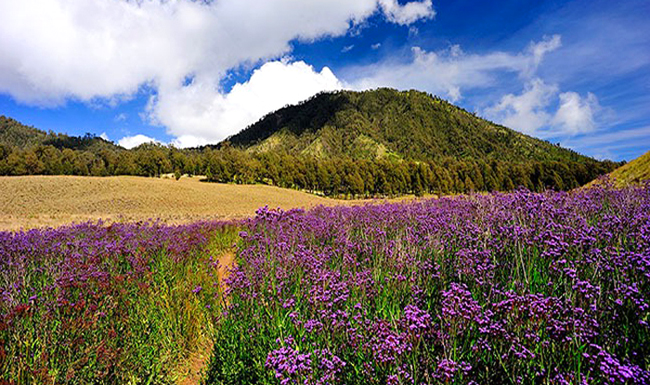 Semeru Mountain has been recognized as the tallest volcano in East Java, even in Java Island, Indonesia. It becomes tourists’ favorite vacation destination to do numerous types of activities like trekking, an adventure, photography, or even relaxation. One of the best spots to visit is called Oro-Oro Ombo, which is a natural garden located in a highland. Visitors come to the location either for taking pictures of beautiful flowers or simply relaxing. The site also becomes a checkpoint for those who want to climb Semeru Mountain! Spending time in that place would be quite romantic for couples as well.

The Nuance
The most noticeable feature in Oro-Oro Ombo Indonesia is the formation of beautiful purple flowers called Verbena brasiliensis vell. The color of the flowers is similar to that of lavender so many people have a misperception when coming to the field at the first time. That area is surrounded by trees, hills, and meadows! All of those features combine into one and astonish those who visit the site. On top of that, tourists are allowed to pick the flowers and bring them back home (terms and conditions applied).

Exploring Oro-Oro Ombo Garden
The size of the field is about 20 hectares and it is covered mostly by those purple flowers. The fact is that the flowers have a certain combination of colors like purple, green, and yellow. With such beautiful appearance, Verbena becomes the perfect object for photography there. In a nutshell, the landscape of the field is similar to that of the France or Dutch. No wonder, it feels like spending a vacation in a foreign country. Not to mention the atmosphere is quite refreshing there. The rejuvenating air of Semeru Highland would make everyone comfortable, for sure.

One thing that tourists must know is that Verbena has a short lifespan. The most recommended time to visit the field is between January and August when the flowers bloom beautifully. Outside those times, tourists would get disappointed as no flowers are visible to watch there. As mentioned before, it is allowed to pick the flowers. The only requirement is that they must follow the instructions given by the trekking team. Those people would also give permission whether tourists can pick the flowers or not. It depends on the condition of the field, after all.

Trekking is also popular in Oro-Oro Ombo Garden. A route is simpler than that of Semeru trekking adventure so it is suitable for beginners (those who have low stamina or lacking experience). As for the tip, trekkers must carry some equipment like camera, bottled water, snacks, comfortable footwear, etc. Coming with a tour guide is also recommended even though it might cost some money.

How to Get There
As the name suggests, the field belongs to Oro-Oro Ombo Village, Batu Sub-District. It takes about 30 minutes from Lumajang City, East Java, Indonesia. The distance between Lumajang City and the field is about 10 km. That means it is going to be a short and comfortable trip.