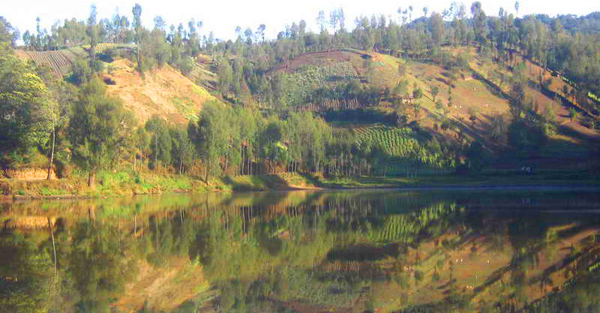 Being the part of Bromo Tengger Semeru National Park, a beautiful lake like Ranu Pane should be on everyone’s list when visiting Lumajang of Indonesia. To be exact, the location is in Senduro Sub-District and it is chosen as a recommended place to relax. Apart from enjoying nature, tourists are able to witness the majestic Semeru Mountain from the site. Also, trekkers use the lake as a checkpoint and resting place before they continue their journey. The fact is that the lake is part of the safest route to reach Mount Semeru Indonesia.

The Nuance
Now, it is time to describe how beautiful the lake is. Located in a highland, the lake definitely features cold water and chilly atmosphere. Despite the fact, visitors love such condition as they can feel refreshed and enjoy a peaceful nuance of nature. In term of size, Ranu Pane Lake has the width of 1 hectare. Lots of trees grow and surround the site, creating a comfortable nuance. Another important fact is that the lake is located near to a local village inhabited by mostly farmers. A meadow is also available on which tourists can explore! The entire features make the lake is worth an exploration for sure.

Exploring Ranu Pane Lake
Some locals call it Ranu Pani. Well, it derives from the name of the nearby village inhabited by Tengger Tribe. That means tourists can visit the village while heading to the lake either for resting or restocking foods. Some boot-camps are also available near to the lake, which can accommodate tourists and trekkers. The lake itself offers a peaceful nuance and it helps everyone to eradicate stresses. At night, the temperature becomes chiller but it features more beautiful scenery like sparkling stars and Milky Way.

It is recommended to stay for several days in Ranu Pani so tourists can feel different nuances both in the morning and night. Have no worries. The local people have provided some resting places like villas and homestay. That means tourists can rent a room and spend a vacation longer there. The villagers are friendly and helpful, as well. They might tell the story about the history of the lake, which was formed due to the eruption of Jambangan Mountain.

Unfortunately, swimming is a bad idea. The water is considered too cold for swimming so it would be uncomfortable to get in. Not to mention it is quite deep. As an alternative, tourists should visit a famous ancient monument which resides near to the lake. According to the locals, it is the reminiscence of Majapahit Kingdom. No one knows why the monument stands near to the lake, though. As for tourists, they can take advantage of the monument to take pictures or selfies with.

How to Get There
The lake belongs to Senduro Sub-District. From Lumajang City, Indonesia, a trip to Senduro may take about 1 hour as the distance is 28.6 km. Tourists can simply follow Semeru Street and head to that region right away. Next, they can consider renting a jeep to reach the lake. It is the most common transportation to use to head to the lake actually.