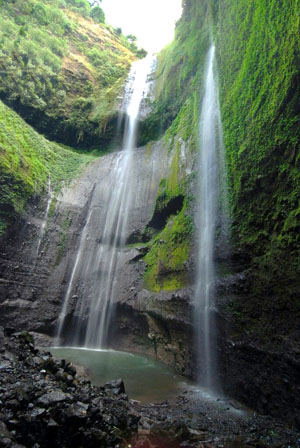 Spending a vacation in Bromo Tengger Semeru National Park Indonesia is everyone’s concern, especially those who love nature. Not only it becomes the best place for trekking, but it also provides other amazing tourist spots to explore. For instance, there is Madakaripura Waterfall. It belongs to Probolinggo District and has been recognized by passionate travelers. In fact, Madakaripura is the highest waterfall in Java Island of Indonesia and it is the second to Gura-Gura Falls when it is within a national scope. The location is in Negororejo Village, Lumbang Sub-District.

The Nuance
The height of Madakaripura Waterfall reaches up to 200 meters and the water flows continuously, even during dry season. No wonder, the locals call it an eternal waterfall due to its unstoppable flows of the water. Like other common waterfalls, a small pond resides below the falls. The water is fresh and safe, so tourists are allowed to get in it. The next breathtaking feature is the formation of cliffs that surround the area. Due to its height, it is impossible to climb up to the top of it for sure. That means tourists can only watch and explore the waterfall from below.

Exploring Madakaripura Waterfall
Tourists have different reasons in visiting Madakaripura Waterfall. For example, they want to witness the charm of such highest fall with their own eyes. Most of the visitors also take the opportunity to do photography and take some great pictures there. As for the recommendation, tourists should come to the location before 2 pm. Why is that? It is to avoid the humidity and excessive water debt due to the rain. With this fact, that means the best time to visit the waterfall is in the morning or early noon.

The lush nature and the height of Madakaripura Waterfall are some of the charms of the site. Another fact is also available, actually. It is related to its legend. According to the locals, Madakaripura was once a land owned by Gajah Mada (the vice regent of the Majapahit Kingdom). It was given by the king (Hayam Wuruk) as the recreational place for his right hand during the retirement days. Even though the kingdom failed to unified the archipelago, the king didn’t forget how helpful Gajah Mada during the effort to achieve that goal.

What’s next? All the way to Madakaripura Waterfall is also considered interesting for tourists in Indonesia. The reason is none other than the opportunity to perform a short trekking. No wonder, tourists must spend about 20-30 minutes in order to reach the site done from Negororejo Village. Have no worries. The landscape is easy and the route is short, so everyone can pass through it without hassles. On the other hand, it is going to be fun and refreshing.

How to Get There
The distance between Probolinggo City and Lumbang Sub-District of Indonesia is about 97.5 km and the trip takes approximately 3-4 hours. Also, the best route to use is Malang – Surabaya Street. Once they reach Negororejo, the next thing to do is trekking to the site where Madakaripura resides.