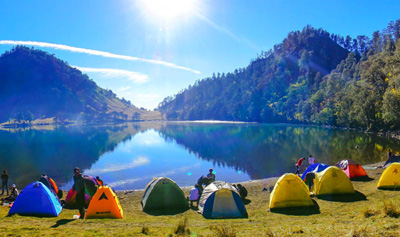 Talking about Bromo Tengger Semeru National Park, people are likely to think about majestic mountains and an interesting activity like trekking. Apart from that, several lakes reside in that area offering a peaceful nuance and fresh air to tourists. One of them is called Ranu Kumbolo which belongs to Lumajang District, Indonesia. It has pristine nature and a strategic location where trekkers often use for resting. No wonder, the lake has been chosen as one of the best checkpoints for trekking in Semeru Mountain. Even though it takes a little bit effort to reach the location, no one would get disappointed in visiting the lake.

The Nuance
Once tourists arrive at the lake, they would be astonished by its lush nature. Such pristine views never fail to amaze tourists, after all. The lake has calm and beautiful water, surrounded by trees and hills. Near to the lake, a meadow is available on which visitors can use for sitting or relaxing. Sometimes, in fact, tourists build a tent near to the lake and perform camping there. At noon, the sun ray reflects beautifully on the surface of the lake! All of those features make Ranu Kumbolo more popular than other lakes in Bromo Tengger Semeru National Park of Indonesia.

Exploring Ranu Kumbolo Lake
The most challenging thing about a vacation in Ranu Kumbolo Indonesia is that tourists need to do much effort in reaching the location. Still, some people take advantage of it for an adventure and trekking. Due to this reason, one of the reasons in visiting the lake is the opportunity of an exploration. For those who are interested in such activity must wear proper clothing and footwear, though. If necessary, they must carry bottled water and snacks.

The next reason to visit Ranu Kumbolo Indonesia is a favorite activity like camping. It is quite common to camp near to the lake as the locals often do it. For foreigners, they are allowed to do the same thing as long as they take care of the environment while camping. Littering is prohibited so everyone should never do it. It is because some campers often become so reckless regarding the cleanliness, which may ruin the purity of nature around Ranu Kumbolo Indonesia.

How to Get There
For those who want to visit Ranu Kumbolo Indonesia, they can take off from Lumajang City. The trip may take about 53 minutes to the site and the distance is 28.6 km. To achieve Ranu Kumbolo trekking, climbers have to walk down a path for approximately 5-7 hours from post registration Ranu Pane. During the trip, hikers can rest in the posts have been built, there are 1 to 4 posts in this area.