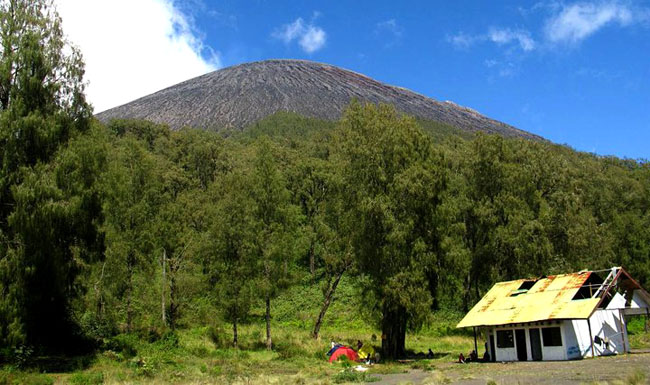 Trekking becomes a challenging activity when it is done on a site like Semeru Mountain Indonesia. It is an active volcano with a level II of alertness. Despite the danger, trekkers are allowed to climb up the mountain until a certain checkpoint. Usually, they might gather in Kalimati Post which resides in 2,700 meters above the sea level. To be exact, it is about 2.8 km before Mahameru Peak. The post can’t reassure the safety of the trekkers, though. There are several cases of injuries and death in that location, especially due to the recklessness of the trekkers.

The Nuance
When it comes to the nuance, Kalimati post features wild nature. Lots of big trees, plants, and shrubs grow around the site. The most common trees which can be seen are the pines. They appear big and beautiful ornamenting the post. Even edelweiss grows abundantly in that location. As for the background, the majestic Semeru Mountain never fails to amaze everyone. The next feature is the camp field where tourists can build a tent and rest. The post also becomes the site to keep their belongings before continuing their trekking.

Exploring Kalimati Post
Usually, Kalimati Post would get more visitors during a special day like Isra Miraj. Also, it becomes a popular tourist destination among trekkers during long holidays. Both local and foreign trekkers are seen at the site because they share similar interests and want to obtain new experience in Semeru Mountain Indonesia. In fact, it can reach more than 150 visitors per day! It is a good thing as, actually. With more people, trekking to the post feels safer and merrier. Those people can ask for help from others, as well.

Due to the high number of visitors, there is a limitation regarding those who are allowed to climb the mountain or reach Kalimati Post. According to the locals, the limit is 500 per day. This number is likely to increase over time especially during long holidays or weekends. Not to mention all trekkers should sign a statement letter during the briefing. They must state that they would follow the instructions and never pass over Kalimati Post. Otherwise, no one would guarantee their safety or even life during trekking. Another precaution is that they must use only an official route to go up. This prevents them from getting lost when heading to the post.

In order to access the post, tourists must pay the fee. It may cost more expensive during holidays, in fact. Have no worries. It is a worthy expense! When tourists arrive at the post, they are able to enjoy stunning views of nature and take some pictures. They even get the opportunity to see a famous statue called Arcopodo. It is said only lucky or chosen people can see it!

How to Get There
From Lumajang City, tourists should head to Senduro Sub-District which has the distance of 25 km. That means it takes about 1 hour to reach the site. Once they arrive at Senduro, their next destination is Ranupani trekking entrance. The last thing to do is to climb to Kalimati Post Indonesia, which takes about 8 hours! The distance is 18 km, after all.