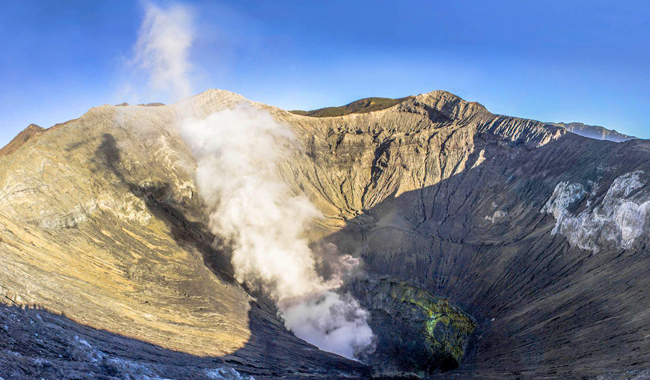 One of the most famous parts of Bromo Mountain is definitely its crater. As the name suggests, the crater was formed due to the explosion of Tengger Volcano, which was the tallest mountain at the time (having the height of 4000 meters above the sea level). According to the locals, the crater is considered safe so tourists are allowed to get near and witness it directly. Apart from witnessing the crater, tourists also visit the site to watch a local tradition (offering) called Kasodo. The others also come to the crater to conduct photography.

The Nuance
When it comes to the size, the crater has the diameter of about 800 meters (from the north to south) and approximately 610 meters (from the east to west). One thing that tourists should know is that they must avoid a specific area of the crater, which is considered quite dangerous. That spot emits deadly gas so no one should get careless when approaching the crater. Sometimes, in fact, the smoke appears without any warning. The local government indeed warns tourists not to get too close to the crater. Still, most of the visitors won’t miss the chance to reach the crater and watch its charm with their own eyes.

Exploring Bromo Crater
A jeep and horse service is available in Cemoro Lawang Village (the trekking checkpoint). The fee is cheap as long as they know how to bargain, especially during working days. The best time to start trekking is in the morning when the sun rises beautifully. The distance between the checkpoint and the crater is about 2 km. It would be tiring if tourists go by foot, actually. In this case, it is better to reach the crate by either a horse or jeep. Spending money for comfort is a good thing, after all.

Once they reach the peak of the crater, they are able to witness the stunning phenomenon of the volcanic mountain from up close. In this case, carrying a camera would be quite helpful for them especially to capture stunning sea of sand and other beautiful panoramas. It would be great if they have the opportunity to watch Kasodo (traditional offering). It is quite possible, actually. They only need to review the schedule regarding the event before visiting the crater. As for the tip, they must talk to either a tour guide or travel agency as the expert has reliable information regarding such agenda.

When it comes to the facilities, stairs are available near to the crater on which tourists can use to go down and get near to the site. Once again, no one is allowed to act carelessly when exploring the crater. At least, they must follow any instructions given by the locals. Also, it is safer coming with a local guide.

How to Get There
The easiest way to reach the crater is from Lumajang City of Indonesia, which takes about 2-3 hours. The distance is about 82.3 km and tourists can take Probolinggo - Wonorejo Street. As for the tip, it would be simpler and faster if they hire a tour agent to manage the transportation service.