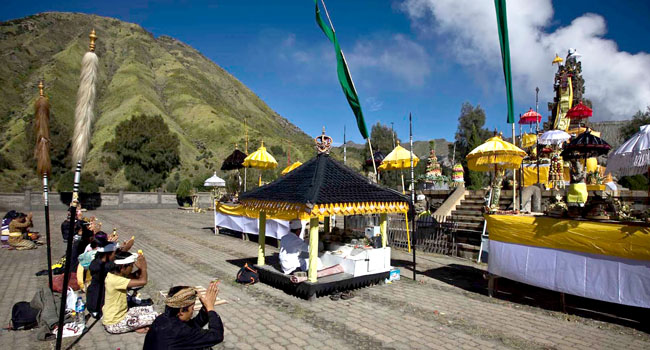 Tengger Tribe lives near to Bromo Mountain and they have a unique tradition called Kasada Ceremony. It is an offering provided to the deity or the guardian of the mountain. The locals have been doing it for decades as it is being passed down for generations. As for tourists, the ceremony provides an opportunity to witness such unique culture and take some pictures during the procession. If they are lucky enough, they would be able to join them and go to the top of Bromo Mountain Indonesia together! That means the locals are quite open to everyone, including local and foreign tourists.

The Nuance
During the ceremony, the locals would wear traditional clothes and prepare the offerings (rice, meat, cakes, and other similar things). Some men would shoulder and carry it all the way to the top of the mountain / the site where the offerings are placed. The women have one task which is to keep the white shawl intact. Together, those people walk carefully for about 1-2 hours to reach the site. Here is the good news. Tourists are allowed to join them!

Enjoying Kasada Ceremony
Many things can be learned from Kasada Ceremony. This annual event is usually done between 14-15th days of the month or during the full moon. Apart from being the local heritage, such culture also represents the influence of Hinduism among Tengger Tribe. Not only it becomes a cultural heritage, it also acts as an intermediary between the human and deity. The locals are likely to ask for good fortune by conducting such tradition. As for tourists, they often take such opportunity to look for good fortune, especially related to prosperity.

So, when should tourists go to Bromo for enjoying the event? Well, it is recommended to come in the middle of the month. However, the locals only conduct the ceremony once in a year. It is going to be difficult for tourists to find the right day, for sure. The solution is that they must consult with a tour agent or simply look for information from the locals before visiting Bromo Tengger Semeru National Park. Despite the troublesome preparation, watching and joining the ceremony would be a worthy experience.

After reaching the crater of Bromo, the locals start the procession led by the shaman. The ritual starts exactly in the middle of the night, actually. Thus, tourists must wear comfortable clothes or a jacket as the temperature could be quite cold up there. As an alternative, they can join the procession at noon instead of following the locals to go up to the mountain at night.

How to Get There
For those coming from Lumajang City, Indonesia, they can simply take a local transportation service and head to Bromo Tengger Semeru National Park Indonesia. The distance is approximately 84 km. That means the trip may take about 3-4 hours depending on the traffic. Make sure to come at the right time when the ceremony is performed by the locals, though.