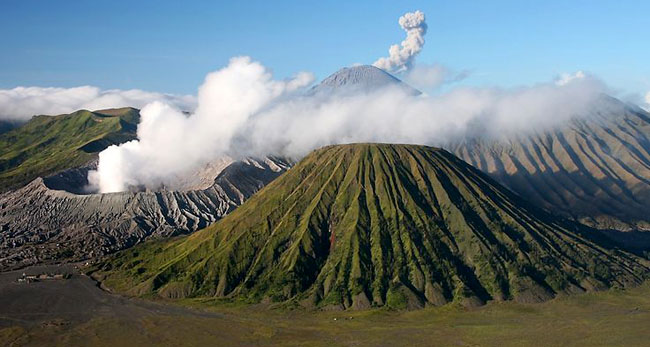 Bromo Tengger Semeru is made of lots of tourist destinations and one of them is called Batok Mountain. The location is in Tosari Sub-District, and it is part of Pasuruan City of Indonesia. Despite the small size (when compared to nearby mountains), it also becomes an interesting destination to enjoy trekking and an exploration. Here is an important fact related to the mountain. Batok is part of Tengger Mountain Indonesia. Moreover, other 4 mountains are available there on which tourists can visit. In terms of uniqueness, Batok offers both breathtaking panoramas as well as an interesting legend.

The Nuance
The height of Batok Mountain is approximately 2,440 meters above the sea level. Well, it doesn’t belong to Pasuruan City per se. Other regions also share it including Probolinggo, Malang, and Lumajang. The shape of the mountain is similar to a coconut shell (Batok in the Javanese Language). No wonder, the locals named it based on such similarity. When it is about the location, the mountain resides near to Semeru and Bromo! Unlike its siblings, Batok is actually an inactive volcano. Thus, it is considered safer for trekkers or any people who want to get near to the mountain.

Exploring Batok Mountain
The best thing to do in Batok Mountain is trekking. It often becomes a special destination among tourists visiting Bromo Tengger Semeru National Park Indonesia, as well. It is fun to hike the mountain and the panorama is quite amazing too. Even though it has inferior facilities when compared to Bromo or Tengger, the local government keeps providing improvements there. Knowing this fact, tourists must prepare better stamina and stocks before trekking to Batok. Another reason is that the landscape is more challenging than other mountains.

Even though it lacks facilities and services, Batok Mountain keeps luring new tourists over time. Thanks to the great panorama. The mountain has unique values as compared to the others. Plus, visitors have the chance to enjoy photography while trekking. The shape of the mountain itself is quite particular. This explains why tourists often take a picture of it and share it to their social media accounts. It is a good thing as other people might read such post and get interested in visiting Batok someday.

Another special charm of Batok Mountain is the local legend. It is said such coconut shell-like shape was formed due to the failure of Bima the giant in fulfilling Rara Anteng’s requirement for a marriage. Due to his uncontrollable rage, Bima kicked the coconut shell and it turned into a big mountain. As for tourists, they can learn the information from either a tour guide or the locals.

How to Get There
For those coming from Pasuruan City of Indonesia, they can take Bromo Tosari Street and head directly to Tosari Sub-District. The distance is about 53 km and it takes approximately 2 hours to reach the location. Not to mention it involves trekking if they want to reach the top of Batok Mountain Indonesia!