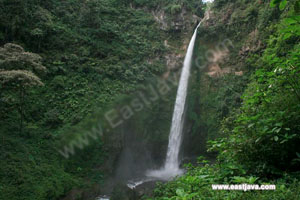 Bromo Tengger Semeru National Park of Indonesia is also famous for its stunning waterfalls. One of them is located in Gabukklakah Village called Coban Pelangi. It belongs to Poncokusumo Sub-District and part of Malang City, Indonesia. Coban means “waterfall” and Pelangi means “rainbow. As the name suggests, the water emits numerous colors which combine into a rainbow. The thing is such phenomenon doesn’t always occur so tourists should come at the right time if they want to witness it. Usually, it appears between the morning and afternoon. It is also recommended to come with a local guide who knows the site well.

The Nuance
As mentioned before, a rainbow may appear sometimes passing through the waterfall. Such beautiful phenomenon indeed may astonish all tourists who visit the area. Not to mention lucrative types of trees grow well there, creating a comfortable ambiance to the site. Thanks to the superb location of the falls (about 1,400 above the sea levels), the air feels so refreshing and soothing. Another important fact is that the water feels cold but rejuvenating. Tourists are allowed to get in the pond and take a bath there, as well.

Exploring Coban Pelangi Waterfall
Coban Pelangi Waterfall becomes one of the checkpoints for hikers who are going up to Semeru Mountain. No wonder, many trekkers take their time for resting near to the falls and enjoy some drinks before continuing their journey to either the crater or other spots. Not only the waterfall offers a comfortable atmosphere and beautiful rainbow, it also becomes the home of wild animals, especially local birds. This explains why visitors might hear the song of nature like the chirps of the birds, songs of the insects, etc.

The next interesting thing tourists can do in Coban Pelangi Waterfall is to approach the villagers. Those who live near to the waterfall are mostly Hindu people. Some Moslems also live in that area, though. Despite the difference in belief, all of them live in harmony. On top of that, they may welcome tourists with a good manner. They even give tips to tourists who want to explore the site wholeheartedly. Not to mention some of them are good in talking English and might help tourists regarding their needs.

The best time to visit Coban Pelangi Waterfall is between 10 am to 2 pm. Why is that? At the time, tourists have a better chance to witness the rainbow and take a beautiful picture of it. It also becomes the best time to enjoy the atmosphere as the air is fresher and more comfortable. Even it feels soothing at noon!

How to Get There
Coban Pelangi Waterfall is located in Poncokusumo Sub-District. From Malang City, Indonesia, the trip takes about 1 hour and 20 minutes as the distance is 35 km. Tourists can take the fastest route, which is Raya Gokor Street, actually. Once they reach Gubukklakah Village, they only need to spend several minutes of trekking. One thing, it is better to wear a jacket as the temperature could be quite cold in the morning. Another important tip is that visitors are not allowed to litter and they must take care of the trash after eating snacks or drinking something on the site.