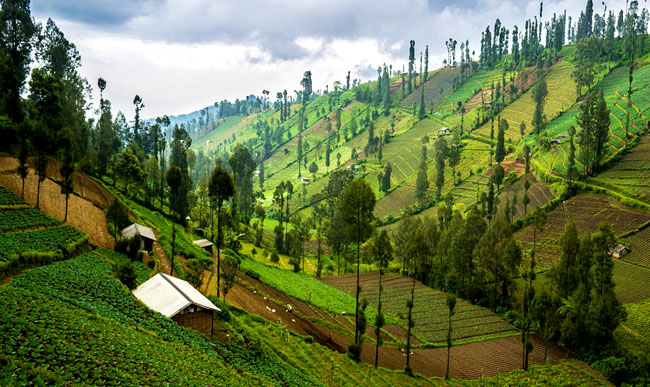 Some villages reside near to Bromo Tengger Semeru National Park of Indonesia and one of them is called Ngadas. Such serene village belongs to Poncokusumo Sub-District and it can be reached from Lumajang or other nearby cities. The location of the village is the easternmost of Malang City and it is located near to Lumajang. Not to mention it is part of Bromo Tengger Semeru National Park. Moreover, the government has assigned it as a tourism village so travelers are allowed to enter and explore it during a vacation such national park. Due to its comfortable nuance and unique culture, the village has been chosen the place for relaxing and resting, especially among trekkers.

The Nuance
Here is the question. What makes Ngadas Village is different than others? The answer is definitely its location. According to the locals, more than 30 villages are inhabited by Tengger Tribe but Ngadas is considered the best one which has been attracting either local or foreign tourists. These people come to the area in order to enjoy its serene nature and fresh atmosphere of the mountain. Not to mention they have the chance to get closer to the locals and learn some culture. Tengger Tribe lives traditionally, after all. That means their traditions become another attraction for tourists. Even the local government retains the culture of those people and tries to introduce it to tourists.

Exploring Ngadas Village
The best thing to do in Ngadas Village is to enjoy the lush nature of the mountain. Some tourists are also interested in visiting the village to learn a little bit history of a famous man called Sedhek. He was a powerful man who lived in that area. The locals considered him as the only person who could fully understand nearby volcano and its activities. Unfortunately, he had passed away. It is true the role of Sedhek is similar to that of Merapi’s Marijan. Both of them were called the caretaker of the volcano but they died already.

Another important fact is that Sedhek was considered the founder of Ngadas Village. Well, no one has proofs regarding such information. What tourists know is that they can learn something about him as well as enjoying the nuance of the village. The next important thing to know about Ngadas is that the whole area belongs to Tengger Tribe and no one is allowed to trade it. This rule has been passed down from generation to generation.

Apart from nature, Ngadas Village is also famous for its culture. Several unique entertainments can be enjoyed including “Kuda Lumping” (leathered horse dance), Kencak Dance, and others. There is also a special tradition done by the locals called Wolo Goro. The other performances are Entas-Entas, Tugel Gombang, Kuncung, etc.

How to Get There
In order to reach Ngadas Village, tourists need to head to Poncokusuman Sub-District, Malang Regency of Indonesia. The best route to use is Raya Pakis Street and it takes about 2-3 hours. For the information, the distance between those areas is 57 km.